State Bar of Nevada members work hard to improve our organization and further the development of the legal profession. Please join us in recognizing the invaluable contributions of our 2019 State Bar of Nevada Membership Award recipients:

The State Bar of Nevada’s Presidential Award is presented annually to a bar member practicing 20 years or more whose conduct, honesty and integrity represents the highest standards of the legal profession. Award recipients inspire by example, advance the administration of justice, and bring honor to the profession.

Senior Judge Howard D. McKibben was first appointed to Nevada’s Ninth Judicial District Court in 1977, beginning his period of active judicial service, which spanned for more than 30 years. Prior to his appointment to the bench, he practiced for several years in rural Nevada, and he was elected as district attorney for Douglas County in 1970. In 1984, he was appointed to the U.S. District Court for the District of Nevada by President Ronald Regan and served in that role until he assumed senior judge status in 2005.

“Judge McKibben’s career in public service has been an inspiration to all of us in the Nevada legal community.  He ascended to the federal bench at a troubled and challenging time for the judiciary in the District of Nevada, and over the past three decades his skills, hard work and service to the federal judiciary on a national stage have been extraordinarily effective in creating and enhancing the sterling reputation the Nevada judiciary now enjoys across the nation,” said Richard Pocker, president of the State Bar of Nevada. “Litigators from other states and districts throughout the country fortunate enough to have tried cases in his courtroom have proclaimed him to be the best judge before whom they have ever appeared, a sentiment enthusiastically shared by those of us from closer to home.”

The Medal of Justice Award is awarded to a person, group or entity that supports Nevada’s legal community. Recipients are those who inspire by example and who demonstrate commitment to the advancement of the profession and to the protection of the public. This year, the state bar is issuing two Medal of Justice Awards. 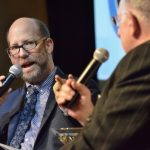 Attorney Dayvid Figler has amassed a reputation for being a tireless advocate for real justice in Nevada. From his advocacy for stigmatized individuals such as those with mental illness or those who are homeless, to his work to reform the justice system, Figler has accomplished tangible, meaningful change for Nevada.

Among his many accomplishments, Figler was instrumental in the creation of Nevada’s first problem gambling diversion court. He revived a moribund 2009 statute to allow diversion over prison for problem gamblers. After the diversion court was established in October 2018, Figler also represented the first person admitted to that court, and he continues to bring awareness to both the public and to law practitioners regarding the intersection between problem gambling, punishment, treatment, and justice. Other judicial jurisdictions are now looking to Nevada as the model for similar diversion courts.

The formation of the problem gambling diversion court is only the most recent of Figler’s numerous achievements in justice reform. Other examples of his efforts in this area include his work exposing a practice of witness payments in the district attorney’s office, leading to the abandonment of that practice; his work to end the practice of utilizing three-judge death penalty panels in Nevada, which was declared unconstitutional by the Nevada Supreme Court; and his work to advocate for homeless persons in the justice system, including the creation of the Homeless Warrant Quash program and his work to support the Homeless Connect Program.

Figler is a native of Las Vegas and became one of the state’s youngest lawyers when he passed the Nevada bar exam in 1991 at the age of 23. In addition to more than 20 years practicing in criminal defense, Figler served as a Las Vegas Municipal Court judge from 2003 to 2004. He is a noted radio personality and regular contributor to the Nevada Independent. In 2019, readers of Desert Companion magazine voted Figler “Most Influential Las Vegan.”

For many years, Bank of Nevada has consistently demonstrated leadership in support of the legal community and legal aid in Nevada. From offering free CLE, to hosting fundraisers for legal aid, to supporting Nevada’s state and county bar organizations, this institution stands out. 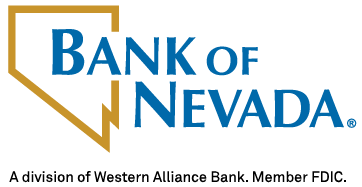 In 2018, Bank of Nevada took its support of legal aid further by voluntarily increasing the interest paid on Nevada Interest On Lawyer Trust Account (IOLTA) accounts to 1.2 percent. This action will increase annual Nevada Bar Foundation IOLTA granting by at least a half-million dollars. Even prior to this change, Bank of Nevada was already the single largest contributor to Nevada legal aid through IOLTA.

This leadership has inspired other Nevada financial institutions to also raise their IOLTA rates, further increasing the funds available to provide legal help to Nevadans who are struggling to make ends meet. This leadership increases the financial stability of Nevada’s legal aid providers and provides more direct legal aid to Nevadans in need.

VOLUNTEER OF THE YEAR:

The Volunteer of the Year award recognizes outstanding service by members of a state bar committee or section.

At the time of his death in August 2018, Mark Hinueber was one of the longest-serving members of the Nevada Lawyer Editorial Board, having served on that state bar committee for more than 12 years. His professional expertise and contributions directly enhanced the magazine’s quality, not only improving its written content, but also improving the processes and procedures that go into developing it.

Most of Hinueber’s 42-year legal career was spent working for newspapers. In 1978, he founded the in-house legal department for Scripps League Newspapers Inc. He went to work as Donrey Media Group’s in-house counsel in 1994, and he relocated to Las Vegas in 1999, when the company moved its headquarters.

Hinueber represented the Las Vegas Review-Journal (RJ) for many years, successfully taking a number of cases to the Nevada Supreme Court on the paper’s behalf. He eventually became vice president, general counsel and human resources director for the RJ. He retired in January 2016, although he continued to act as a consultant for the paper. He remained a dedicated volunteer on the State Bar of Nevada’s Nevada Lawyer Editorial Board until just a few months before his death.

During his many years of service, he developed the bar’s copyright procedures and contracts, consulted with the editorial board on publishing and advertising trends, and helped the magazine and state bar navigate intellectual property and publishing best practices. The contracts and procedures he developed are still in use today.

YOUNG LAWYER OF THE YEAR: 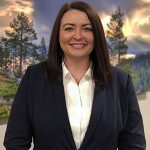 The Young Lawyer of the Year award recognizes the professional and public service achievements of Nevada attorneys who are either under the age of 36 or who have been engaged in the practice of law for fewer than five years.

Attorney Amber Handy is a tireless advocate for and provider of pro bono services in northern Nevada. She works with two legal aid providers – Nevada Legal Services (NLS) and Volunteer Attorneys for Rural Nevadans (VARN) – to provide legal advice to disadvantaged Nevadans, particularly by participating in the Lawyer in the Library and Serving Seniors programs.

As a result of her efforts, her firm, Handelin Law Ltd., received the Champion of Justice – Small Firm award from NLS in 2015. She also received a Certificate of Appreciation from VARN in 2018. In addition to providing pro bono legal advice, Handy also assists legal aid efforts by coordinating other attorneys, increasing the reach and scope of pro bono programs in northern Nevada.

An energetic and committed volunteer, Handy has served on the executive committee of the Young Lawyers Section (YLS) of the State Bar of Nevada since 2014, representing Carson City. She represented the YLS at the American Bar Association’s Young Lawyer Division’s 2017 annual meeting. She is the current editor of the YLS newsletter, and also volunteered as a judge for the National High School Mock Trial Championships held in Reno in May 2018.

A resident of Carson City, Handy practices in a wide range of legal areas, including estate planning and administration, business formation, real estate, personal injury, residential community association issues, administrative law, and family law. She earned her J.D. in 2013 and joined the State Bar of Nevada the same year.